The Market Theatre curated a series of 30-minute online productions under the banner of Salute the Playwright, shot in high definition that premiered 10 April 2021. Diaparo Tsa Mama 26 May– 27 June  is the third production of a series of 10 that will be produced under this banner for this season. Salute the Playwright  presents a mixture of South Africa and Continental works that will be online throughout the year as part of the 45 years of the Market Theatre celebration.

New to the Market Theatre writing sphere is writer and director Rorisang Matuba who brings us this heart-warming drama Diaparo Tsa Mama. On the eve of their mother’s funeral, two sisters, aged 23 and 29, sort through their beloved matriarch’s clothes in search of the perfect outfit to bury her in. Their sensitive nostalgia morphs into harrowing discoveries about death, grief and survival. 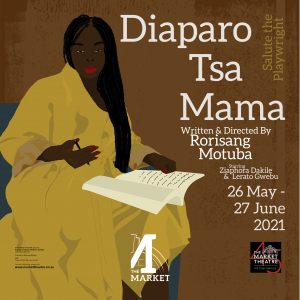 Memory is a way of holding on to the things you love, moments that are part of you and the things that you never want to forget, The sisters debate culture, duty and motherhood as they sort through their deceased Mother’s clothes. One sister must choose their mother’s final resting clothes whilst the other navigates her grief and guilt in a one act play that is a mediation through loss, life and the pursuit of closure.

Written and directed by passionate and gifted young director Rorisang Matuba, she studied Drama, Political Science and Film & Media Studies at the University of Cape Town, where she starred in and produced a number of projects. Following her graduation, she was accepted to the prestigious New York Film Academy and Baron/Brown Studio in Los Angeles, US, where she studied and graduated Magna Cum Laude at the aforementioned institution. After her three-year stint studying Acting and Writing for Film, she returned to Johannesburg where she began pursuing a career in the arts. Since then she has written and starred in numerous South African and international productions and continue to honour her heritage as a natural born storyteller.

Lerato Gwebu and Ziaphora Dakile will star in this heart-warming drama that deals with emotions of loss and womanhood.

Lerato Gwebu joined the South African Airforce in January 2011 after a gap year hoping to escape the world of uncertainty and instability of the South African Arts Industry. She eventually heeded the call and enrolled for a Musical theatre course at TUT in 2013. Her singing takes one to a place in one’s imagination, as she brings the lyrics alive in any musical genre. She is specifically gifted in Soul and Jazz music. Lerato has incredible tap-dancing skills which saw her being on top of her classes during her training season. Her acting abilities were identified by Artistic director of the Market Theatre (James Ngcobo) in 2015 at Tshwane University of Technology during her third year. She was cast in letters from Madiba the same year. A triple thread performing Artist with 4 years’ experience in the theatre space.

Today Lerato is amongst the distinguished upcoming young artists. Her professionalism, work ethic and the love for her craft has gained her respect from the elders in the industry within a short space of time. It has afforded her several opportunities which have seen her growing from strength to strength.

Ziaphora Dakile is new to the Market Theatre stages, she is an actor, poet, production assistant and dialect consultant. She is a graduate of the American Academy of Dramatic Arts (NYC) where she was also a Company member. Recent theatre credits include: Yellow Card, Red Card directed by Tamilla Woodard ( in NYC), Me and the Girls (with Alan Cumming in NYC) directed by Douglas Carter Beane, and Charlie and the Chocolate Factory directed by Jenine Collocott. Off Broadway credits also include: Homecoming Queen (production assistant at The Atlantic Theater), The Revolving Cycles Truly and Steadily Roll’d ( production assistant at The Duke on 42nd street) and Mies Julie( dialect consultant at The Classic Stage Company).

The explosion of online theatre productions during the pandemic has provided an alternative space for theatres. The curation of theatre online has allowed for more audiences to engage with the work.

The Market Theatre’s initiative to interplay between live and digital shows has brought about innovation that is driven by the quest of widening audience reach. This new producing for digital consumption has left us with a gift of a parallel industry.