PASS OVER is a great contemporary piece that resonates globally

The Market Theatre presents Pass Over written by Antionette Nwandu, directed by James Ngcobo by arrangement with Concord Theatricals on behalf of Samuel French Inc will make its South African debut from Friday 26 February – Sunday 28 March 2021.

Pass Over explores the unquestionable human spirit of young black men who dream about a promised land and hoping a miracle will happen. Moses and Kitch are struggling to survive in the tough streets of America. A provocative riff on Waiting for Godot, it’s a rare piece of politically charged theatre by Antionette who is a bold new American voice.

Pass Over is staged in commemoration of Black History Month. Although mainly celebrated in America, the play will  inspire South Africans to have the tough discourse around issues  of common interest like police brutality and white supremacy long after Apartheid. 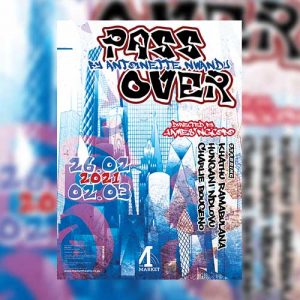 The South African premier of Pass Over  production stars Charlie Bouguenon, Hungani Ndlovu and Khathu Ramabulana. The trio has been gifted with a challenging task of portraying larger than life characters in the play that resemble real life stories.

Kabomo Vilakazi or simply known as Kabomo is no stranger to South African audiences,  he joins the creative team of Pass Over as musical composer. Speaking on his journey for the creation of the music he had this to say “I have created music that will help Pass Over turn the volume up on some of the key themes in the play such as brotherhood, black empowerment, self-belief, violence, white privilege fear, trust, trauma etc. The music is going to be emotional  and the genres I will be dabbling between rap and jazz chords in quite places. This will allow the story to flow uninterrupted”.

Kabomo best known for the roles in the films and television series Zabalaza , Sink and Seriously Single. Apart from acting, he is also a writer, poet, editor, musician, rapper, producer and an artist manager.

She has written two plays YINI? / WHAT IS IT? And Migration of the Heart. She starred in a lead role on the SABC award winning edutainment series Intersextions 2 in 2013, had a feature role in Saints and Sinners 1 on Mzansi Magic and starred as a guest presenter on SABC 1’s YOTV Crib notes

Catch the South African premier of this spectacular drama Pass Over from Friday 26 February to Sunday 28 Mach 2021. Book your seats now!

Charlie Bouguenon as The Man