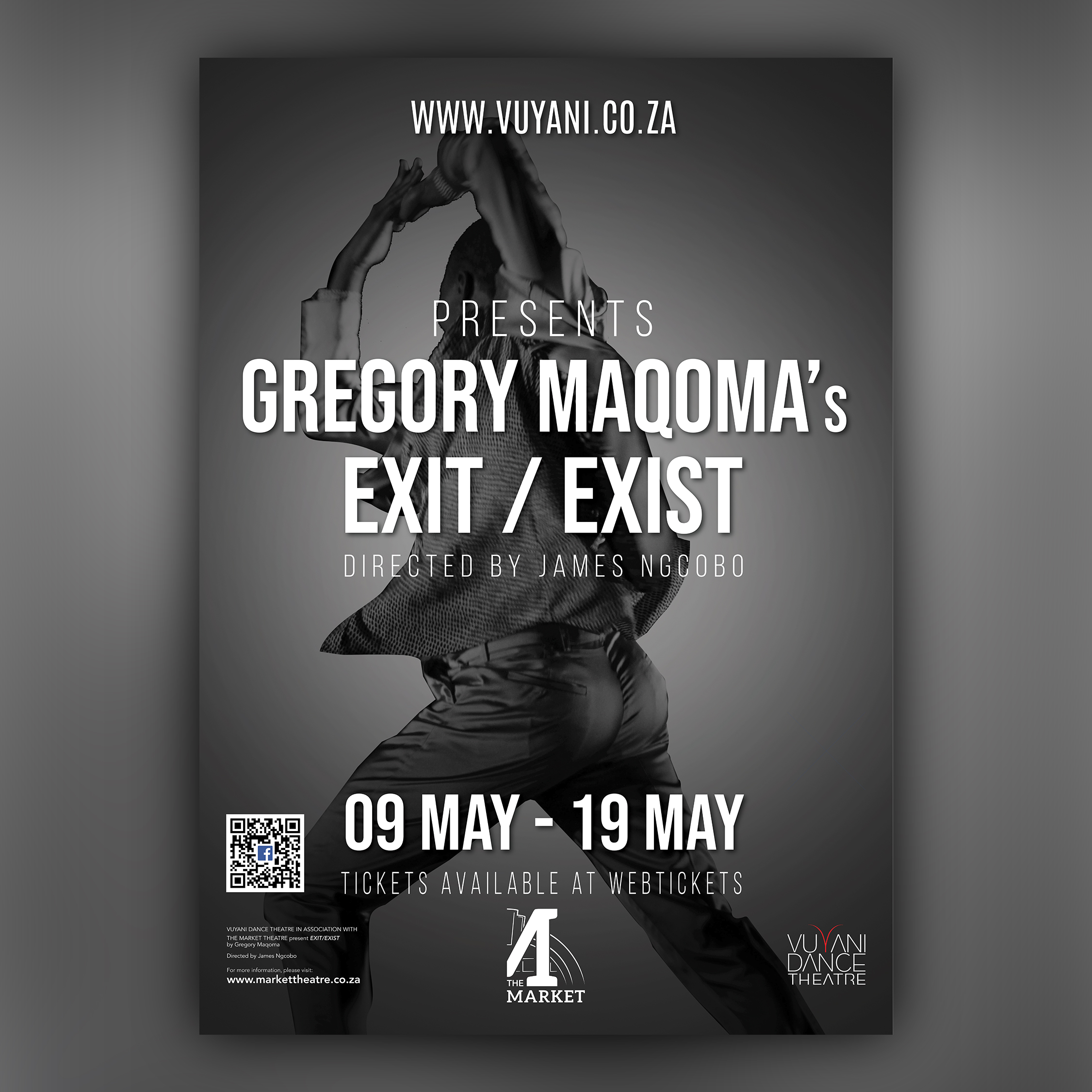 Revisiting our Ancestral Past in today’s context

Exit/Exist a sensitive solo work will make a return to The Market Theatre for a 10 day season during Africa month, starting 9 May – 19 May 2019. This piece still resonates with South Africa today, as we continue to weave through the necessary discourse of land as a nation. It reflects and explores the memory of Maqoma’s distant ancestor, Chief Jongumsobomvu Maqoma one of the most renowned Xhosa leaders, who was born in 1798, arrested when he ordered the English colonisers to liberate Xhosa land and died in Robben Island in 1873.

The core of this piece is memory; rephrasing the notion of existence and the notion of simply existing in order to exist. This production takes a moment to pause; to look back; to rewind the tape to the days when the tapestry of South Africa was about the collision of biographies. A deliberate choice of less exposition and a bigger emphasis on how we use the visual element to tell this tale, while underpinning the musicality, that we hope will evoke the spirit of the time. Maqoma to us is not only an iconic figure of Xhosa land but a figure of historical transformation, the custodian of a movement of a people that cleared the path to an emancipated that he spent his whole life yearning for

Under the direction of James Ngcobo, Maqoma is accompanied on stage by four South African singers and a guitarist Giuliano Modarelli who help facilitate the telling of the story through their harmonious vocals, and with the musical composition from Simphiwe Dana.

Vuyani Dance Theatre (VDT) established in 1999 under the leadership of Gregory Maqoma became one of the ground-breaking greats in South African dance history, while the work of VDT grew beyond the limits of the stage to encompass education, community outreach, and cultural dialogue. Vuyani Dance Theatre now embodies two decades of achievement, celebrating the human spirit with performances that unite and inspire audiences. During this celebratory year of performances, special events, and community activities, VDT will honour this pioneering legacy and its repertoire and carry it forward. Co-produced by the KVS (Belgium), Theatre de la Ville (France) and Dance Umbrella (SA), Exit/Exist was first presented in Belgium in December, 2011. Since its premiere has received international acclaim in over one hundred cities around the world including a New York City Bessie Award for Achievement in Music and Dance Collaboration.

Exit/Exist’s to return to Johannesburg is in association with The Market Theatre, produced by Vuyani Dance Theatre.

The Vuyani Dance Theatre (VDT) is a contemporary African dance company founded in 1999 by Creative Director Gregory Maqoma. After years of gracing international and local stages, VDT is positioned as one of the most cutting-edge, thought provoking and successful dance and theatrical organisations to have emerged in Africa. VDT is spot-on regarding its artistic objective of producing work that questions and challenges social values while, simultaneously, exploiting history as a launch pad for (material) research and development.

The company has performed in Europe, the USA, Africa, Mexico and New Zealand. It has scooped top awards in South Africa for dance and choreography and has received international recognition and continues to do so.
VDT constantly finds co-creators and performers from all over the world. Hitherto, the interaction that includes ideas and empirical artistic participation has led VDT in the direction of efficacy. It can be stated without doubt, at the moment, that all who have been aligned (in turns) with VDT since inception have in one way or another gained from the organization.

Gregory Vuyani Maqoma became interested in dance in the late 1980’s as a means to escape the political tensions growing in his place of birth. He started his formal dance training in 1990 at Moving Into Dance where in 2002 he became the Associate Artistic Director. Maqoma has established himself as an internationally renowned dancer, choreographer, teacher and director. He founded Vuyani Dance Theatre (VDT) in 1999 when he was undertaking a scholarship at the Performing Arts Research and Training School (PARTS) in Belgium under the direction of Anne Teresa De Keersmaeker.

Maqoma is respected for his collaborations with artists of his generation like Akram Khan, Vincent Mantsoe, Faustin Linyekula, Dada Masilo, Shanell Winlock, Sidi Larbi Cherkaoui, Nhlanhla Mahlangu and Theatre Director James Ngcobo
Several works in his repertoire have won him accolades and international acclaim.
This includes FNB Vita Choreographer of the Year in 1999, 2001 and 2002 for Rhythm 1.2.3, Rhythm Blues and Southern Comfort respectively. He received the Standard Bank Young Artist Award for Dance in 2002. Maqoma was a finalist in the Daimler Chrysler Choreography Award in 2002 and in the Rolex Mentorship Programme in 2003. He is the recipient of the 2012 Tunkie Award for Leadership in Dance. In 2014 he received a “Bessie”, New York City’s premier dance award for Exit/Exist for original music composition. He served as a nominator in the 2016–2017 Rolex Arts Initiative as well as curating the 2017 Main Dance Program for The National Arts Festival. His current works ‘Via Kanana’ and ‘Cion: Requiem of Ravel’s Bolero’ ’ are currently touring in Africa and Europe.

In 2017 Maqoma was honoured by the French Government with the Chevalier de l’Ordre des Arts et des Lettres (Knight of the Arts & Literature) Award. In 2018 was honoured by the South African Department of Arts & Culture with the inaugural Usiba Award for dedication to dance teaching. In 2018 Maqoma is one of the selected visiting artists at the Virginia Commonwealth University Dance Department as well as a visiting teacher at Ecole De Sables – Toubab Dialaw – Senegal. Maqoma is part of the selection committee for Dance Biennale Afrique Festival to take place in Marrakech in 2020.

In 2019 Maqoma is choreographing and performing in William Kentridge’s new opera ‘The Head And The Load’ which premiered at The Tate Modern Gallery in London in July, the world tour includes Germany, Holland, Austria and New York.

Block bookings of 10 or more available at a discount of 20%. Tickets can be purchased via Webtickets

About Tribhangi Dance Theatre
Tribhangi means ‘three bends in a body’ and this is demonstrated through their unique presentation, challenging experimentation, enthusiasm and energy – hallmarks of every Tribhangi performance. They journey through the art form, experiment, explore and challenge notions of what Indian Dance is. Their aim is to present work that is intelligent in content, unique in presentation and challenging in its experimentation.