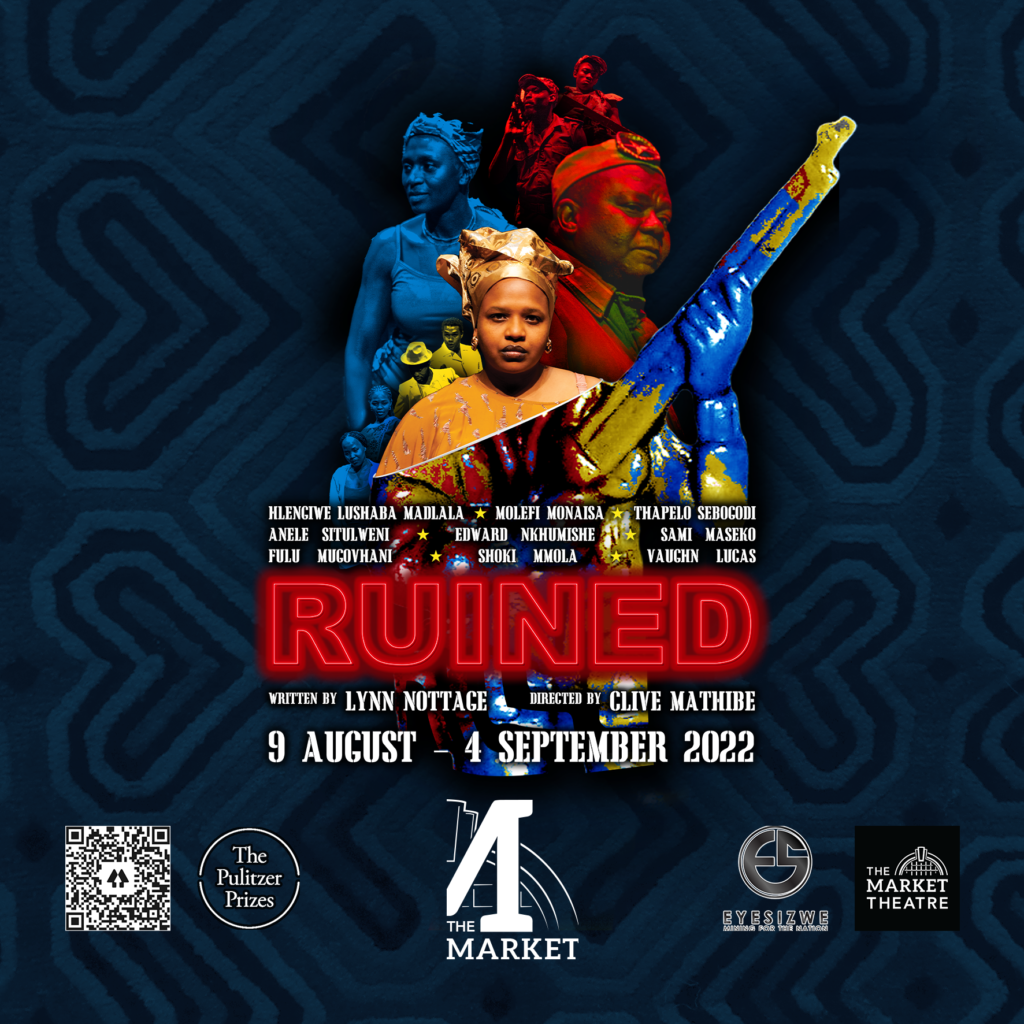 Lynn Nottage’s Ruined is set in a small mining town in the Democratic Republic of the Congo, it follows a life of the tenacious Mama Nadi, a businesswoman who is trying to stay afloat in a world torn apart by civil war. The war has ravaged her country, and especially the young girls who have literally been torn to pieces by soldiers on both sides of the conflict.

Mama Nadi takes “damaged” girls into her brothel/bar and profits from them, but also protects them from the brutality of the world outside her doors. As  such, the women do a fragile dance between hope and disillusionment in an attempt to navigate life on the edge of an unforgiving conflict.

We also meet soldiers and commanders on both sides of the conflict, all frequent customers at Mama’s bar. Ruined was developed during playwright Lynn Nottage’s pilgrimage to Africa, where she interviewed girls and women who themselves were, and continue to be, the battleground upon which war is fought.

Nottage is a multi-award winning American author born in Brooklyn, New York. At age 8, she had already written her first play. Nottage is a graduate of New York’s High School of Music and Art in Harlem. She enrolled at Brown University where she received her B.A degree. She continued her studies and received her M.F.A degree in playwright at Yale School of Drama. Lynn’s plays are being produced worldwide.

Ruined is directed by Clive Mathibe who is a formidable theatre and television writer/director and creative producer. In 2021, Mathibe adapted and directed literary giant, Espkia Mphahlele’s ‘Father Come Home’ at the Market Theatre as part of the centinary celebrations to honor Mphahlele. The production enjoyed rave reviews as well as packed houses re-affirming Mathibe’ s distinctive and necessary creative voice. Mathibe says this about returning to The Market to direct Ruined; “I am thrilled and honored to be telling this story with some notable collaborators in the design team as well as the impeccable cast!”

Ruined offers a graphic portrait of women as lasting victims of war but also shines the light on the self-resilience women of the Congo have after the multiple sufferings inflicted on them. Without minimizing the pain, the production becomes a tribute to women’s endurance.

Ruined is a brilliant play that jolts our consciences about a forgotten conflict. Audiences will emerge both shaken and stirred!

This gut-wrenching production was made possible by the generous support from Eyesizwe Mining Development Trust.

Book Tickets
We use cookies on our website to give you the most relevant experience by remembering your preferences and repeat visits. By clicking “Accept All”, you consent to the use of ALL the cookies. However, you may visit "Cookie Settings" to provide a controlled consent.
Cookie SettingsAccept All
Manage consent