Skip to content
Tap to select the previous period
Next 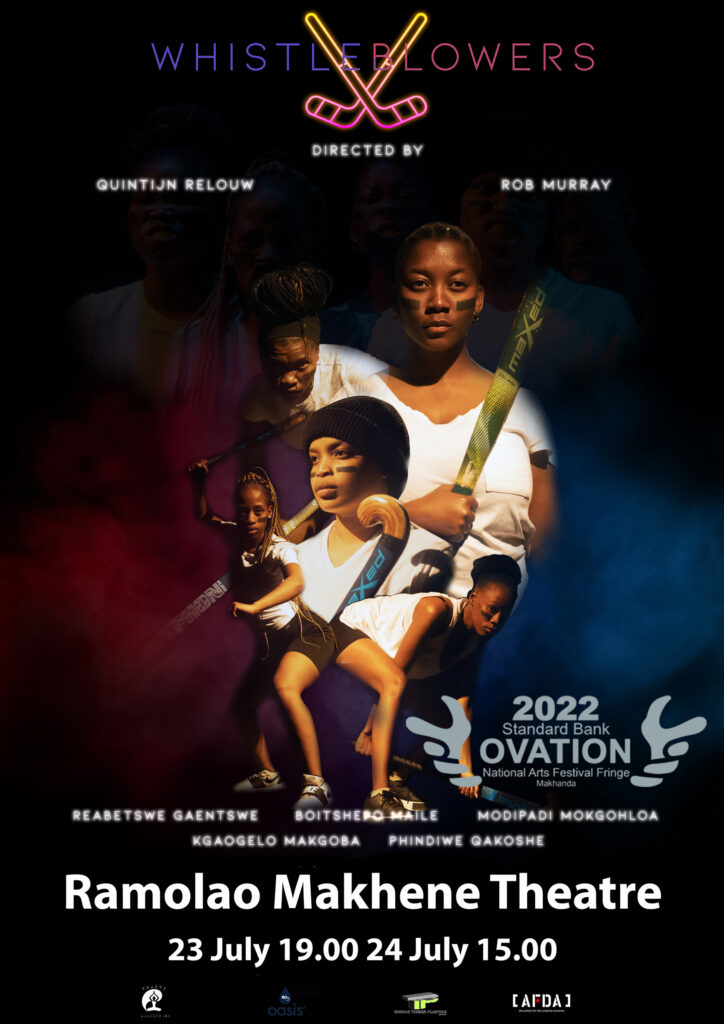 Continuing its recent successful run at National Arts Festival (NAF), where it won a Standard Bank Silver Ovation Award and was the talk of the town, Whistleblowers, directed by Rob Murray and Quintijn Relouw, will have two performances at the Ramolao Makhene Theatre on Saturday 23 July at 19.00 and Sunday 24 July at 15.00.

Whistleblowers tackles the themes of Gender-Based Violence (GBV) and sexual assault through the lens of a high school girls’ hockey match. It is the final game of the season, and the championship title is on the line. But the stakes are much higher than that, as the play reveals back-stories and situations that the young women have been experiencing. As the lines between the game and social commentary start blurring, and the team finds a collective voice of anger and frustration at the plight of women in this country, the team needs to make a vital choice: attack or defend.

Shifting between physical and visual performance, searing storytelling, and surrealist dream sequences, Whistleblowers is an honest and tragicomic call to action. A war cry for the soul.

Whistleblowers premiered at the AFDA JHB Experimental Festival, where it had an immediate impact. This was carried through to its NAF run, which saw weeping audiences, standing ovations, and the production hailed as one of the most talked-about shows at the festival.

Steve Kretzmann, veteran journalist and arts critic, and this year’s editor in chief of The Cue, writes: “So many women killed, raped, mutilated, left for dead. We know their names, some of them, most we don’t, or forget. They are all here, legions of our guilt and our ghosts, all murdered by men. These five performers bring them to raging life, with the desire for vengeance only the living can give to the dead. They are in your face, blood pumping through their veins. The energy is at cup fever pitch. This is a game that has to be won…None of this is played out directly, yet the message seeps through, becoming louder and clearer as the often dreamlike sequences layer upon each other. It is a solid team, well directed with touches of physical comedy reining in the didactic, with imaginative use of set and wonderful touches of mask work…Whistleblowers is a winning work.” (see the full review here)

The performances at the Ramolao Makhene Theatre see the first push of the show before its Gauteng and KZN festivals and schools’ tour for this year and next. It is a show that should be seen by every high school learner – male or female.

Tickets range from R90 with special prices for schools, students, and block bookings, and can be booked here: https://www.webtickets.co.za/v2/Event.aspx?itemid=1516983492

Whistleblowers  is presented by AFDA JHB and Verity Productions.

We use cookies on our website to give you the most relevant experience by remembering your preferences and repeat visits. By clicking “Accept All”, you consent to the use of ALL the cookies. However, you may visit "Cookie Settings" to provide a controlled consent.
Cookie SettingsAccept All
Manage consent